A Unique and efficient Qigong system

Yuan Qigong is a new Qigong system based on the essence of traditional Qigong, adapted to the needs of people in this modern age. The methods are easy to learn and practice and benefits can be experienced after just a short period of practising.

The goal of the Yuan Qigong system is to unify the consciousness, body and Qi and create a true “totality” unification – to unify with the universe. A successful practitioner can raise life to a new level. Our potential abilities can be developed and life can be changed deeply. 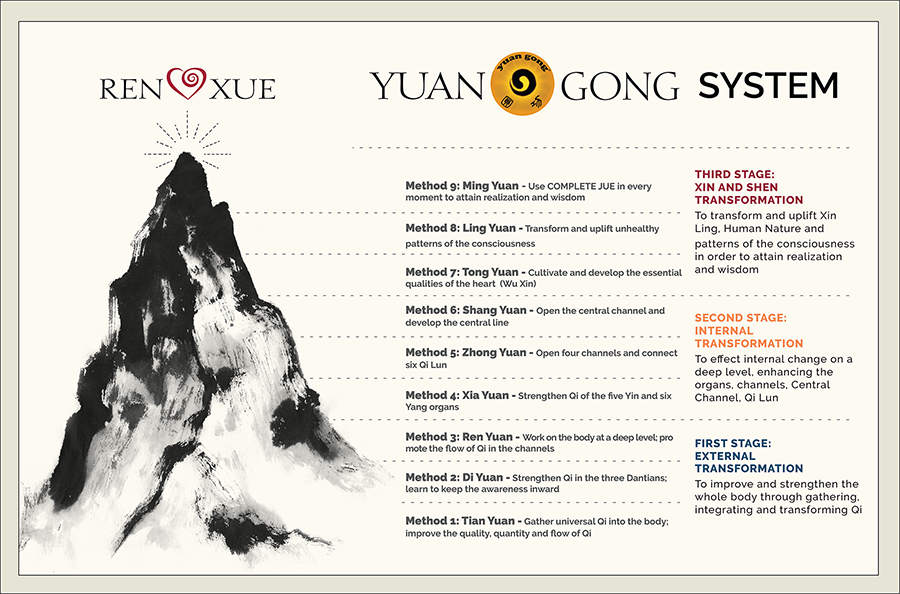 Each Method in Yuan Qigong Guides You Forward, step by step

The methods can be compared to the construction of a multi-storey building. The first four floors are the methods that lay the foundation for practice. They are all based on movement. Each method processes Qi in its own way and you move forward step by step as you follow the methods. From the fifth floor onwards the methods continue to advance and consist of “Still Qigong” meditation that is practiced using the consciousness without any physical movements. Practising Still Qigong in the correct way is powerful and effective for developing the consciousness and life as a whole.

When practising Tian Yuan, we use the mind together with physical movements to achieve a strong exchange of Qi with the universe. The body, mind and Qi become connected at a deep level and the state becomes calm and relaxed, focused and harmonious.

Tian Yuan is simple to learn. A short three hour course could be sufficient to enable you to start to a practice. Tian Yuan is very pleasant to practice; it is like a joyous meditation in motion – flying in freedom. The method helps to effectively clear blockages in the body, especially in areas such as the shoulders and neck where most adults have blockages due to stress.

The practice of Tian Yuan provides the body with more universal “Yuan Qi”, but to be more effective the Qi needs to be converted to our own personal Qi with our own information. Di Yuan both provides us with more Qi and supports this transformation.

When practising Di Yuan, we use the breath and consciousness together to focus on the three Dantians (Qi-centres in the body) in turn. Lower Dantian supports the physical body and its movements, Middle Dantian the organs and Upper Dantian the consciousness.

The third method is an innovation in Qigong development. It has its roots in traditional and modern Qigong, along with a wide range of disciplines including traditional Chinese medicine, Taiji, martial arts, anatomy, physiology and sports science. The design of the method is inspired by the natural circular and spiral movements of many astronomical bodies in the universe.

Ren Yuan enables and supports the flow of Qi in the Qi channels of the body. When Qi and blood flow smoothly and harmoniously together, we feel refreshed and light.

When the method is performed correctly, the movements are initiated by a light awareness of the consciousness. This awareness activates and directs Qi to move in the desired direction, this in turn leads to physical movements. This way the movements will flow without effort and you will feel weightless; everything will flow naturally. Any discomfort and pain will disappear. How does it work? Say you want to move your hand. To do this, firstly you need to unify with your Qi and body and get into a very calm state, then have the light intention of “raising your hand”. Qi will then be activated automatically and will raise your hand.

The method is perceived by most practitioners as appealing and delightful; time seems to pass quickly. After some time practising becomes very enjoyable like a pleasant dance. The benefits are evident even when first starting to practice the third method.

Ren Yuan opens up and allows Qi to flow in the channels and it builds physical strength; it strengthens tendons, muscles and bones. The practice also helps create mental strength with the mind, body and Qi supporting each other and working as an integrated unit. As a result, the mind becomes calm and focused.

Xia Yuan uses a combination of consciousness activities, movements, sounds and colour visualization to activate Qi in several key organs in the body – the liver, heart, spleen, lungs and kidneys. It is easy to learn and the movements, breathing and sounds make Xia Yuan a pleasant method to practice.

Zhong Yuan is a Still Qigong method and its main purpose is to open the central channel of the body. From the start, a special breathing technique is used to build up Qi into Lower Dantian. When enough Qi is available, Qi starts to flow up along the Du Mai channel. Gradually a natural circulation of Qi at a very deep level is activated and flows around the Ren Mai and Du Mai channels, the so-called Microcosmic Circuit.

With continued practice and focus Qi then automatically flows into other channels and opens up the so-called Macrocosmic Circuit. This is what happens in the first step of five, in the fifth method. Progress in Zhong Yuan requires consistent practice, patience, conviction and focus, and it is probably something you can practice for your whole life.

When the Macrocosmic Circuit is open, our work continues in order to open the Central Channel and the supplementary Left and Right channels. The first four Yuan Gong methods support the opening of these channels and Di Yuan lays the foundation for a concentration of Qi in the Lower Dantian, an important prerequisite for opening the Central Channel.

Shang Yuan is another still Qigong method and is for opening the Central Line in the torso, legs and arms. When the Central Line is open, the consciousness is expected to influence Qi at the level of one’s genes.

Good preparation, diligent practice and dedication are required to gradually make progress with the fifth and sixth methods. The important foundational base must first be created, followed by persistent effort to open the many channels before the Central Channel is opened, and even more effort is required to develop the Central Line.

Those who are versed in Qigong or Yoga know it’s invaluable to open the main channels. They often practice meditation to get there directly. Yuan Tze who has worked long and deeply in this area has not seen anyone succeed using this approach. There are no shortcuts; it is impossible to skip the first five methods and go directly to the sixth method. Everything should be prepared and practiced in the right way, with understanding at consciousness level and true conviction and reverence. We simply have to follow the laws of life.

Tong could be understood as barrier free or free moving. The whole expression can be translated to “Focus every aspect of life (i.e. your body, mind, Qi) deeply into Xin (your heart). Also connect Xin to, and unify with the external (universe). Using meditation work on Xin (heart) to attain realization and wisdom.

Ling Yuan, the eighth method is a meditative Yuan Gong practice to process and transform the patterns of the consciousness. During our life, we develop patterns to be able to meet and handle everyday events and situations in a simple and fairly standardized manner. However, a lot of these developed patterns can cause great limitations and problems in life, effecting self-esteem, creating fear and doubt and even self-sabotage, or alternatively always blaming our problems on others. In Ling Yuan, we shine light on these patterns and try to transform and replace them with healthier ones. This work can be both interesting and inspiring and incredibly transformative for the whole of life.

Ming Yuan, the ninth method is used to approach the true self during a continuous state of self-observation (Jue Cha) and thereby achieve self-realization and wisdom.

Understanding and aligning with the natural laws of life Ren Xue is the system of theories and teachings created by Yuan Tze with the goal of understanding and thereby elevating our life. Yuan Qigong is a Qigong system that supports the positive transformation of all areas of life, body, qi, heart and consciousness.

What is Yuan Qigong? Yuan Ming is a system of treatment methods based on Ren Xue theories, modern science and traditional chinese medicine.

What is Yuan Ming? Qi is our life force, the fabric of all existence. Understanding Qi is vital to achieving a healthy and harmonious life.